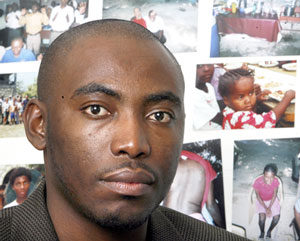 His story is one of a man who’s been to hell and back. Kidnapped on a missionary trip from Tampa to Haiti, Daniel Thelusmar took a little piece of heaven with him along the way. Despite travel warnings from the United States government, Thelusmar traveled to Port-au-Prince, Haiti, in December 2005 where, while delivering supplies to an orphanage, gunmen took him hostage for ransom. In the midst of what he describes as a war zone, Thelusmar witnessed to his captors about Jesus Christ for four days. “There were people dying next to me,” he said. His kidnappers threatened to kill him unless his family paid a $100,000 ransom. By the grace of God, he said, they released him for a payment of $10,000.

The often bloody streets of Port-au-Prince in politically torn Haiti are a far cry from the manicured lawns and quiet nights surrounding Thelusmar’s Lake Magdalene home. Still, Haiti, a place where he nearly lost his life, is where he left his heart.

Now back in Tampa working in a call center, Haitian-born Thelusmar wants to share his story as a testimony of the ever-present need, violence and, yes, even the humanity there.

IN A NATION of poverty and instability almost unrivaled in the West, Haitians constantly risk being shot or kidnapped, along with facing joblessness and hunger.

Such is the desperation that Thelusmar is seeking local support to funnel to Haiti. And, despite the mortal danger, he said “I have to go back.”

“There’s a great need down there.”

Thelusmar spent a majority of his 28 years in Haiti, moving to the United States in 2002. He has childhood memories of passing “at least 20 bodies in the street” every morning on his way to school. And now, “things are worse down there in Haiti than they were when I was growing up,” said Thelusmar.

“We’re going through a crisis.”

Most of the dozen or so children living at the Tytoo Gardens orphanage have been orphaned by either violence or disease. Located north of the capital in a village, the center feeds about 150 more orphans.

And in October 2006, Thelusmar, with support from local charitable groups, started the Heart to Heart Caribbean Elementary School.

While their efforts are growing, support – money and volunteers – remains stagnant.

“I’ve been thinking of putting together a book about my whole ordeal and the situation of Haiti,” said Thelusmar. “Maybe that way I can raise money.”

THELUSMAR’S ORDEAL seemed a grave one.

Despite warnings from the U.S. government not to travel to Haiti, he went anyway.

With a wife and child here in Tampa, why did Thelusmar take the risk?

He had to help, he said.

“I didn’t know what else to do but go there.”

Bearing money, food and clothing for the orphans of Tytoo, Thelusmar arrived in Port-au-Prince.

The center’s Canadian director picked him up from the airport to take him to the orphanage, but they were hijacked en route.

With United Nations soldiers in pursuit, the gunmen marched him from the scene, separating him from Hughes.

Considering Thelusmar more a liability than an asset, one of the teenaged gunmen pointed a 9mm to his head.

“I told him, ‘I know you are about to shoot me but … you will not destroy me. You cannot kill my soul. What you have in front of you is just my body. It’s like wasting your bullet.”‘

The gunman and Thelusmar continued walking and then began to run as authorities pursued. Some of the kidnappers shot at the approaching soldiers, while others fought over the $1,000 US currency they stole from Thelusmar.

The first place they took him was a small house.

It smelled of urine.

Hoping to negotiate his freedom, Thelusmar asked to speak with the captors’ commander.

Having grown up in the area, Thelusmar hoped that someone would know him. “I’m trying to make a connection wherever I can,” he said.

Hours later, he came face-to-face with the commander.

“Do you know you’re going to die?” he asked Thelusmar.

“That is up to God,” Thelusmar answered.

“I told him, ‘You do not look like a criminal. You just look like a militant. You’re fighting for survival, and I think we’re in the same situation.'”

The commander forced Thelusmar to call his wife in Tampa. Either pay the $100,000 ransom, or Thelusmar was dead, the commander told her.

It was a Saturday.

Presumably eluding the authorities, the gunmen moved Thelusmar from location to location until night fell.

Gunfire echoed in the darkness.

The gunman who was ready to kill Thelusmar earlier that day, and who had fired at his car during the abduction, asked him, “Do you have superpowers?”

“He didn’t understand why I didn’t have any bullet wounds,” Thelusmar said. “I told him I am God’s servant. It has nothing to do with voodoo. It has to do with God’s protection.”

“I do not believe you are going to die,” the young gunman replied.

On the third day, the commander, knowing Thelusmar was a missionary, took him through the Cite-de-Soleil ghetto, a mere 40 minutes from the international airport. There, he said, he saw “dogs eating dead bodies in the street like pork” and people, with no clean water and no food, sick from malaria, AIDS and tuberculosis.

“You were right from the beginning,” the commander told Thelusmar. “I’m not a criminal. This is what we’ve been dealing with.”

The commander offered him food, but unsure of what would stay down, Thelusmar opted for Coca-Cola during his captivity.

The commander also offered him a chance to preach to his foot soldiers.

It came naturally. Missionary work has been a part of his life since he was 11 years old.

Four of the men accepted Christ as their personal savior.

By Tuesday, the kidnappers were paid.

SINCE HIS OWN ordeal ended, Thelusmar has had two others close to him kidnapped: his brother Fenel Thelusmar; and the orphanage director, who lost his arm in the December 2005 ambush.

Daniel Thelusmar’s brother disappeared for more than a month this November but later escaped his captors and remains in hiding in Haiti.

The orphanage director, Hughes, was kidnapped again in June 2006, said Thelusmar. The perpetrators demanded $200,000 but settled for a $2,000 ransom.

Still, the threat of kidnapping won’t thwart Thelusmar’s efforts to educate, feed and clothe orphans and other needy Haitians.

“I think it’s my calling … to provide for them,” he said. “I’ve been called to serve them. I feel that it’s an obligation.”

Long the most impoverished nation in the Western Hemisphere, it has a history of political unrest.

The violence has been especially extreme since the February 2004 overthrow of President Jean-Bertrand Aristide.

International officials estimate that as many as 12 people are kidnapped in Haiti daily.

Many are killed even after ransom is paid.

The violence exists against a backdrop of relentless poverty, oppression and disease.

UNICEF estimates that AIDS has orphaned nearly 200,000 children. Only slightly more than half of primary school-age children are enrolled in school and fewer than 2 percent of children finish secondary school.